Residents and officials in northwest South Sudan say a new European Union-funded bridge that opened this past week will make travel safer, cheaper and faster for people in the remote Bar El Ghazal area.

The $6.5 million span is located in Kuajok, the capital of Gogrial state. Residents of Kuajok say until now, it has often been difficult, even treacherous to cross the Jur River to deliver goods or services.

The 120-meter-long bridge (130 yards) is eight meters (26 feet) tall, likely putting it beyond the reach of floodwaters, even during the rainy season when the river is high. 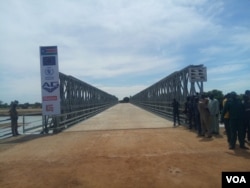 Seventy-four-year-old Mayuot Akeny says it used to take half the day to get to Tonj state from Kuajok.

"Before launching of this bridge, it can take you five hours (to go to Tonj) because the roads are not good. But now if you go up (there) it will take you around one-and-a-half hours. So it has made the distance very short," Akeny told VOA's South Sudan in Focus.

Akeny says the new bridge means traders can expand their reach and cattle keepers will have a much easier time.

"The cars will be moving freely, crossing the river through the bridge. And also will benefit this area by crossing with their animals either you take them to Tonj or you bring them to Kuajok or you take them to the north," Akeny said.

Before the new bridge was built, travelers had to pay at least 50 South Sudanese pounds, the equivalent of of $0.38, for a one-way trip across the river by canoe. The fee affected school attendance.

Thirty-two-year-old Kuajok resident Nyani Yai, a mother of six, says the new bridge is a precious gift to their community.

In the past, Akeny says, many people drowned while trying to cross the river.

“(W)hen the river gets full, they cross by canoes and people have died with their materials and sometimes with their animals," Akeny said.

Ronald Sibanda, the World Food Program country representative for South Sudan, says the new bridge will make delivery of humanitarian aid much more cost-effective in the Bahr al Ghazal area, which has been at the center of hunger spikes for years.

"The bridge link will also provide year-round movement of goods and people and lays a strong foundation for the economic growth of the region by facilitating trade, community integration and promoting stability," Sibanda said. 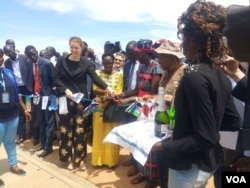 Rebecca Joshua Okwaci, South Sudan's minister for roads and bridges, acknowledges the lack of roads in the country remains a huge challenge.

"I have to confess that we still have challenges in terms of achieving our vision of safe, passable roads or highways for our country. And when we say safe, it's not only safe in terms of there is insecurity. But by safe we mean well-built roads that people will travel on the roads without having accidents," Okwaci said.