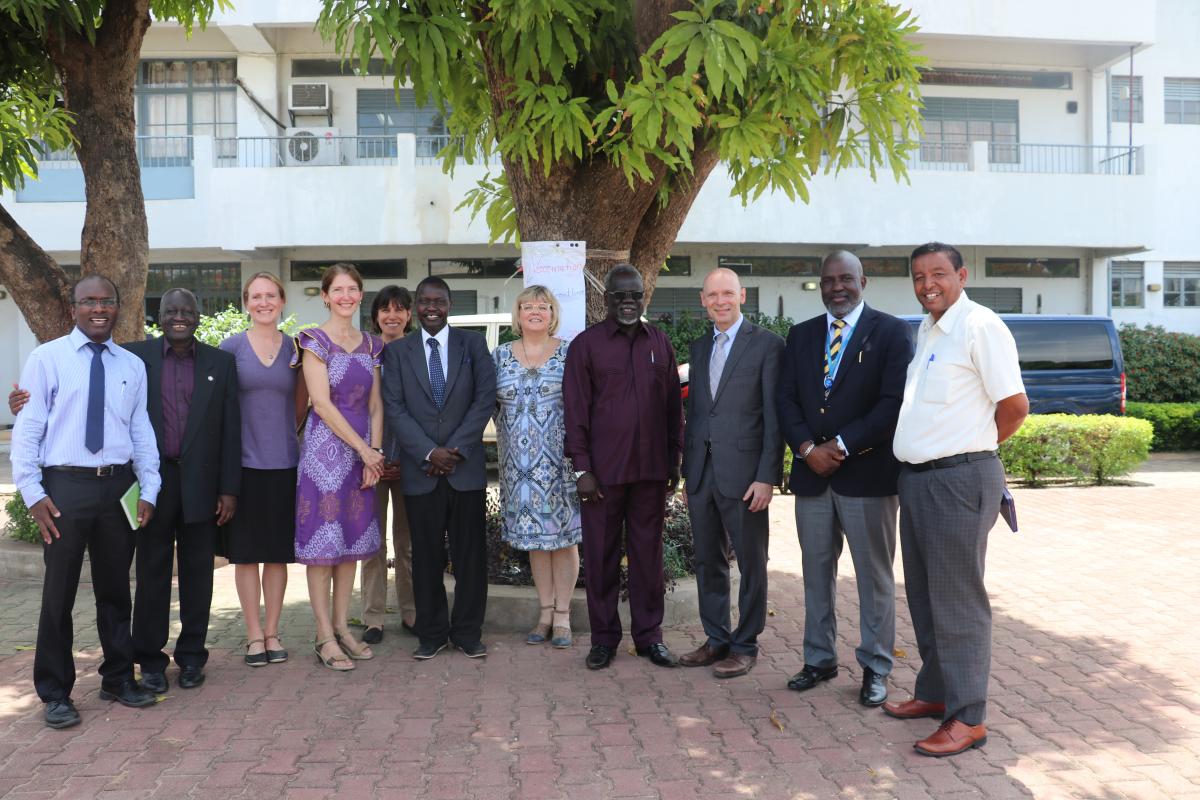 US Amb in a group photo with Hon Minister of Health, WHO Rep, CDC Country Director and other senior officials

Juba, 8 May 2017 – Alice Baku (not real name) a clinician at the Juba teaching hospital said “I am glad I was vaccinated against Ebola Virus disease because prevention is better than cure”

South Sudan started vaccination of frontline and health care workers against Ebola on 28th January 2019 as one of the preparedness measures to stop Ebola from spreading into the country.

On 8 May 2019, the United States Ambassador to South Sudan Thomas Hushek, together with the Honorable Minister for Health of South Sudan, Dr Riek Gai Kok, WHO Country Representative, CDC Country Director, USAID and other senior officials paid a courtesy call on one of the Ebola vaccination sites at the National Public Health Laboratory in Juba. The team witnessed the ongoing Ebola vaccination exercise firsthand, interacting with the Ministry of Health led Vaccination team.

Ambassador Thomas Hushek noting the challenge posed by the ongoing conflict in the Democratic Republic of Congo in controlling the Ebola outbreak, emphasized the importance of fast tracking the peace process in South Sudan. The Ambassador Thomas was also pleased with the preparedness efforts and lauding the progress made so far, and said: “the experience, data and lessons from this exercise will drive the future science of Ebola Virus Disease.”

In his remarks, the Honorable Minister Dr. Gai Kok commended the members of the vaccination team and the frontline health care workers for their commitment and hard work in realizing the Ebola vaccination exercise in some of the most difficult parts of the country over the past four months. Dr. Gai Kok reiterated “Ebola vaccination campaign in South Sudan historical”.

Dr. Olushayo Olu, the WHO Representative to South Sudan, highlighted the hard work that has gone into the planning and preparation of the Ebola vaccination exercise. Acknowledging the leadership provided by the Ministry of Health, Dr Olu, added that this was truly a team work, bringing together several partners.

The CDC Country Director Dr Sudhir, also reiterated that the vaccination initiative is a reflection of extraordinary amount of hard work by many committed individuals who have worked tirelessly in the past five months under the leadership of the Ministry of Health. Continuing with his commendations, he stated that WHO has provided the much-needed technical support in a tremendously challenging environment. He further remarked that the Ebola vaccination campaign in South Sudan is a historic public health milestone for the country, given the local context, and the myriad public health and social challenges.

Health care workers who recently received the Ebola vaccine (rVSV-ZEBOV) shared their experience with the visitors. The vaccine team members provided a walk through, at the different stations, demonstrating and presenting the processes involved as well as sharing their experiences and lessons learned.

Although South Sudan has no confirmed Ebola case, the vaccination of health care and frontline workers in high risk states is a priority intervention. Dr Kaba Mohamed 2 the Ebola vaccination coordinator said “the exercise has been successfully conducted in 4 high risk states.”

With support from the World Health Organization (WHO), Gavi, the Vaccine Alliance, UNICEF and the US Centers for Disease Control and Prevention (CDC) and other partners, as of 9 May 2019, 2264 health workers and other front-line responders have received the Ebola vaccine as a preparedness measure against possible Ebola infection.

The rVSV-ZEBOV vaccine although not yet licensed is being used under the compassionate-use guidelines as recommended by the WHO’s Strategic Advisory Group of Experts on Immunization (SAGE), has shown to be highly protective against the Zaire strain of the Ebola virus in previous trials in West Africa.

We have 390 guests and no members online