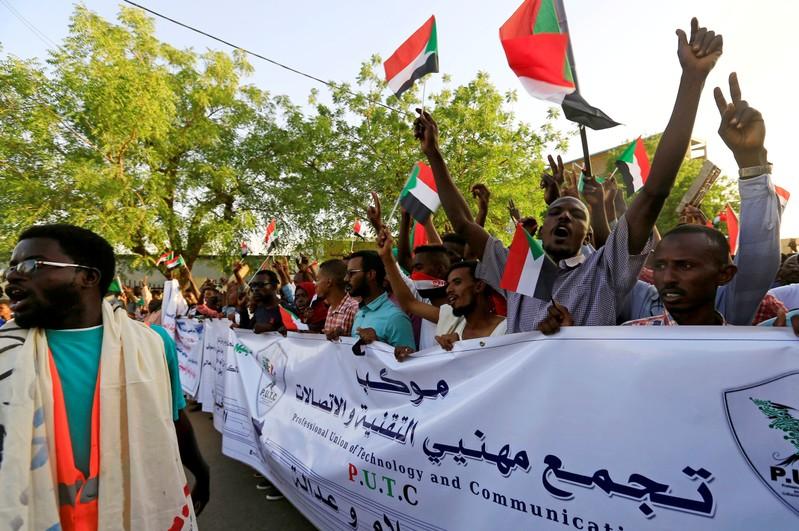 KHARTOUM (Reuters) - Sudan’s ruling Transitional Military Council (TMC) and opposition forces appeared on a collision course on Monday amid deepening differences over demands for civilian rule more than 10 days after the ouster of President Omar al-Bashir.

The TMC warned on Monday against people blocking roads and limiting the movement of citizens, signaling a possible move against thousands of protesters who are camping outside the Defense Ministry and blocking some roads outside the compound in downtown Khartoum.

The council also said it was unacceptable that some young people were acting as police and security services, in violation of the law, a reference to youths who have been searching protesters taking part at the sit-in.

“We request the honorable citizens to help clear these negative features that impact the lives of citizens and the security of the country,” the TMC said in a statement, adding that roads and access ways for public transportation would “be opened immediately”.

The TMC and the opposition have traded threats since Sunday.

The Sudanese Professionals’ Association (SPA), the main organizer of the protests, said on Sunday it would suspend talks with the Council.

“We have decided to opt for escalation with the military council, not to recognize its legitimacy and to continue the sit-in and escalate the protests on the streets,” Mohamed al-Amin Abdel-Aziz of the SPA told crowds outside the Defense Ministry on Sunday.

The opposition, led by the umbrella Forces of the Declaration of Freedom and Change that includes the SPA, has insisted on a swift handover of power to civilians.

They have said a civilian transitional council with military representation should be set up to run Sudan for a transition that the TMC has said could last up to two years.

The SPA has also called for sweeping changes to end a violent crackdown on dissent, purge corruption and cronyism and ease an economic crisis that worsened during the last years of Bashir’s 30-year rule.

The military council, led by Abdel Fattah al-Burhan, has issued a series of decisions that appeared aimed at satisfying some of the demands.

Burhan said on Monday that Bashir, who had been held at the presidential residence after his ouster, is now at Khartoum’s high-security Kobar prison. Family sources had said last week he had been moved there.

Several top members of Bashir’s ruling National Congress Party have been arrested, and the TMC said it would retire all eight of the officers ranked lieutenant general in the feared National Intelligence and Security Service.

A series of anti-corruption and anti-graft measures have also been announced.

The protesters have kept up the sit-in outside the ministry compound, which also houses the presidential residence, since Bashir was removed on April 11. Led by the SPA, they have demonstrated in large numbers in recent days.

TMC head Burhan told state TV on Sunday that the formation of a joint military-civilian council was being considered. “The issue has been put forward for discussion and a vision has yet to be reached,” he said.

Saudi Arabia and the United Arab Emirates said on Sunday they had agreed to send Sudan $3 billion worth of aid, throwing a lifeline to the country’s new military leaders.

We have 181 guests and no members online