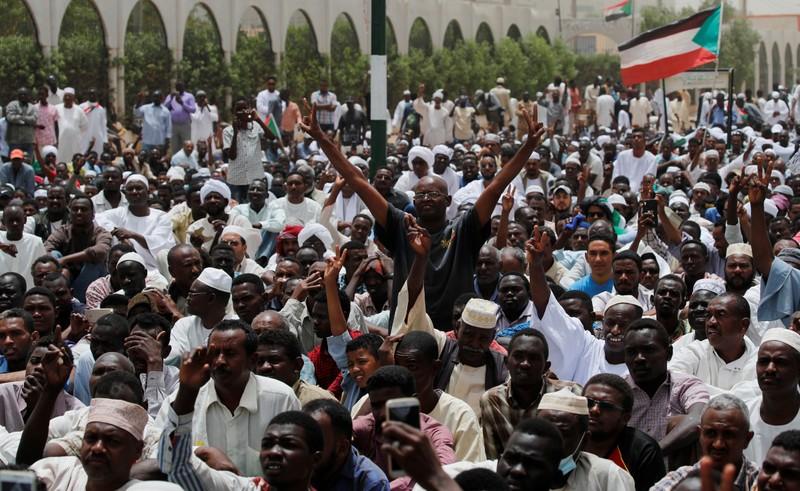 Khartoum (Reuters) - Thousands of protesters demanding an end to military rule flocked to the sit-in outside Sudan’s Defence Ministry on Friday, in the biggest turnout in the center of the capital since last week when former President Omar al-Bashir was ousted and a military council took over.

Protesters waved the Sudanese flag and chanted “freedom, peace and justice”. Children sitting on a bridge nearby banged with stones on the metal pillars to the rhythm of the chants.

The military council has said it is ready to meet some of the protesters’ demands, including fighting corruption, but has indicated that it would not hand over power to protest leaders.

“If we don’t stay it will be as if we hadn’t done anything, we will stay until we oust the military council,” said 26-year-old protester Rania Ahmed.

Not far from the bridge, 10 effigies dressed in security forces uniform and helmets were hanging from a metal pillar, symbolizing protesters’ animosity toward the security forces.

“I look at this everyday and it brings me great happiness,” said Mostafa Abuel Qassem, a 29-year-old photographer.

“This is the pride of the revolution,” he added.

The Sudanese Professionals’ Association (SPA), leading the revolt, has called for sweeping change to end a violent crackdown on dissent, purge corruption and cronyism and ease an economic crisis that worsened during Bashir’s last years in power.

Protesters formed checkpoints at the entrances of the sit-in, wearing yellow vests and body-searching people coming in for weapons to make sure the protest remains peaceful.

Hundreds performed Friday prayers in the sit-in, while hundreds more marched to the area after the praying in mosques nearby.

The sit-in that began on April 6 outside the Defence Ministry was the culmination of 16 weeks of protests triggered by the economic crisis, leading to Bashir being ousted and arrested after three decades in power.

The military council has said a transitional period of up to two years will be followed by elections and that it is ready to work with anti-Bashir activists and opposition groups to form an interim civilian government.

Sudanese have been struggling with sharp price rises and shortages of cash and basic products. Many analysts blame the country’s economic troubles on mismanagement, corruption and the impact of U.S. sanctions, as well as loss of oil revenue when South Sudan seceded in 2011.

We have 144 guests and no members online