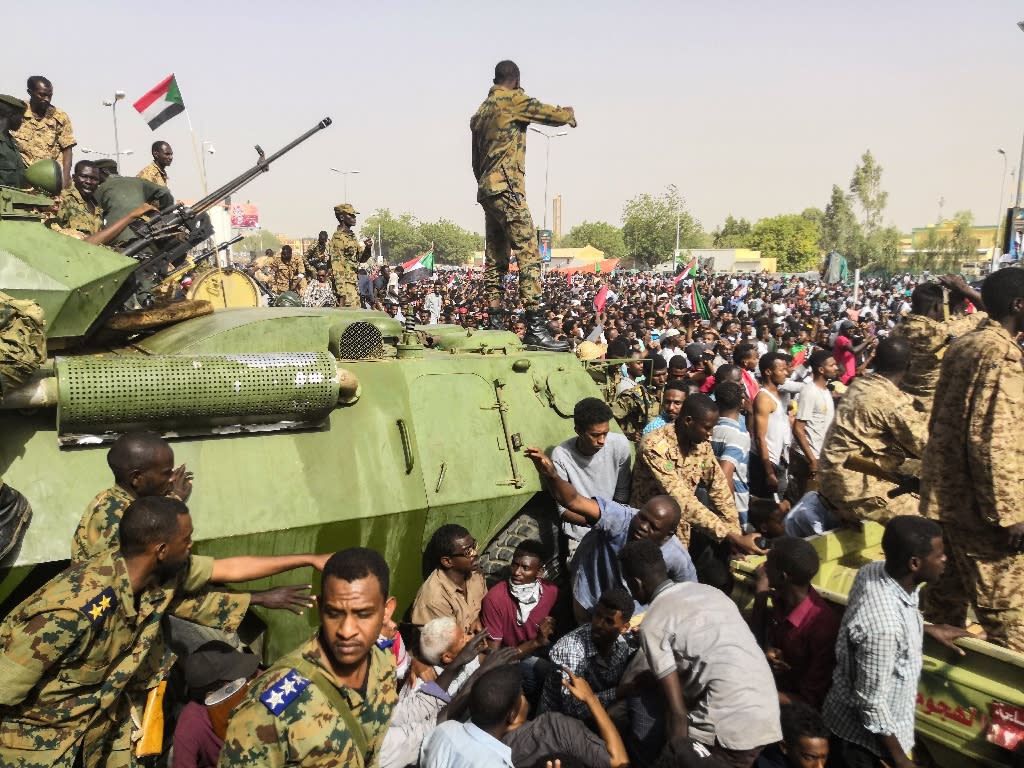 Paris (AFP) - The ousting of Sudan president Omar al-Bashir by the army brought the curtain down on 30 years of iron-fisted rule in the northeastern African nation but failed to quell the anger of protesters who remain encamped outside army headquarters.

Few international or regional powers shed public tears over the fall of a man who presided over years of civil war, the break-up of his country and is wanted by the International Criminal Court (ICC) for war crimes in the region of Darfur.

But with protesters fearing that even with Bashir gone the military takeover heralds no meaningful change, the situation remains combustible in the Red Sea state of some 43 million, which borders seven countries.

How are world and regional powers viewing the takeover and what would be the consequences outside Sudan of a prolonged period of violence and instability?

Sudan sits nestled in a hugely diverse region in northeast Africa bordered by regional powerhouse Egypt to the north, with strife-torn states like Libya and Chad to the west and key regional player Ethiopia to the south.

According to the International Crisis Group, Sudan is "surrounded by neighbours facing internal difficulties of their own" and should Sudan descend into chaos, "the turmoil could spill across borders".

A wary observer of events in its bigger neighbour is South Sudan, which was created in 2011 as an independent state after years of fighting under Bashir and has itself been beset by conflict. Sudan remains a guarantor of South Sudan's own peace agreement.

But the biggest potential flashpoint could be Chad, where the government is fighting both Libya-based rebels and Islamist Boko Haram extremists.

Analysts expressed concern over the naming of Mohammad Hamdan Daglo as the deputy chief of Sudanese military council. Widely known as Himeidti, he heads the feared Rapid Support Force (RSF) that grew out of the "janjaweed" militia accused of abuses in Darfur.

"If Himeidti sufficiently reinforces his power he could be tempted to destabilise Chad," said Jerome Tubiana, an independent researcher specialising in Sudan.

"The RSF are heavily armed and extremely dangerous. They could also export their violence to Libya and the Central African Republic," he told AFP.

The changes in Khartoum come with the conflict in Sudan's Darfur region -- which broke out in 2003 when rebels took up arms against Khartoum, accusing it of neglecting the region -- still unresolved.

According to Tubiana, "there has been no resolution to the Darfur question and the repression is continuing", with the local population and Sudanese security forces still at odds.

The situation is further complicated by the fact that Darfur rebels were currently fighting alongside the militia of strongman Khalifa Haftar in Libya as he seeks to take Tripoli, he added.

"They could be tempted to return to Sudan to remind Khartoum to take account of Darfur," said Tubiana.

Sudan's neighbour Egypt, and Cairo's influential Gulf allies the United Arab Emirates and Saudi Arabia, have raised no objection to the fall of Bashir.

Cairo last week expressed its "complete support" for the Sudanese people and, crucially, the army.

The situation in Sudan has drawn some parallels with that in Algeria, where popular protests won the resignation of ailing leader Abdelaziz Bouteflika but where the existing military elite is still very much in power.

Analysts say the last thing Cairo, Abu Dhabi or Riyadh want in Sudan and Algeria is any kind of popular uprising that could bring to power the Islamist Muslim Brotherhood, which they vehemently oppose.

"If they are offered a military and pro-Arab authority, then they are okay with that even if it uses militia and is violent," said Tubiana.

The European Union and United States have trod nearly as carefully while calling for civilians to be brought into the government.

There is also little chance Sudan's current military authorities, many of whom were themselves involved in the Darfur conflict, will hand Bashir over to the ICC in The Hague to face trial.

In a possible recognition of who currently holds the cards, the US envoy to Khartoum on Sunday Steven Koutsis met key military figures in Khartoum including Himeidti.

"Washington should step up its coordination with the Gulf States and regional leaders such as Prime Minister Abiy of Ethiopia to press both sides to compromise," said Judd Devermont, director of the Africa Program at the Center for Strategic and International Studies.