Sudan's military has ousted President Omar al-Bashir. How did it come to this? And what's next?

Few are expected to miss Bashir, who is wanted for genocide by the International Criminal Court related to crimes committed in Sudan's Darfur region and presided over a government accused of corruption, violence and economic mismanagement.

Tens of thousands of protesters have been rallying across the country of 43 million for weeks calling for democracy, jobs and an end to corruption.

They want a civilian-led technocratic government put in place for four years to try and bring the country together and organize new elections.

"We assert that the people of Sudan will not accept anything less than a civil transitional authority composed of a patriotic group of experts who were not involved with the tyrannical regime," the Sudanese Professional Association, an umbrella group of unions behind recent protests, said in a statement after the military's announcement.

Analysts said those demands aren't likely to be met by the powerful security establishment.

Gen. Awad Mohammed Ibn Auf, the vice-president and defence minister who was appointed by Bashir before announcing the president's removal on state TV, is "very much a symbol of the regime," said Ahmed Soliman, a research fellow at the U.K.-based think-tank Chatham House.

"He is an establishment figure ... and he has been sanctioned by the U.S. government for crimes in Darfur," Soliman told CBC News. "He doesn't come out of the blue as someone who would lead this military transitional council."

CBC explains how Sudan got to this point and what might happen next.

What sparked the latest unrest?

Protests over rising bread prices began in rural areas in December 2018 and quickly spread across the country, which culturally straddles the Arabic-speaking Middle East and Africa.

"Sudan's economic situation at the moment is dire," said Michael Jones​, a researcher at the Royal United Services Institute for Defence and Security Studies in London. 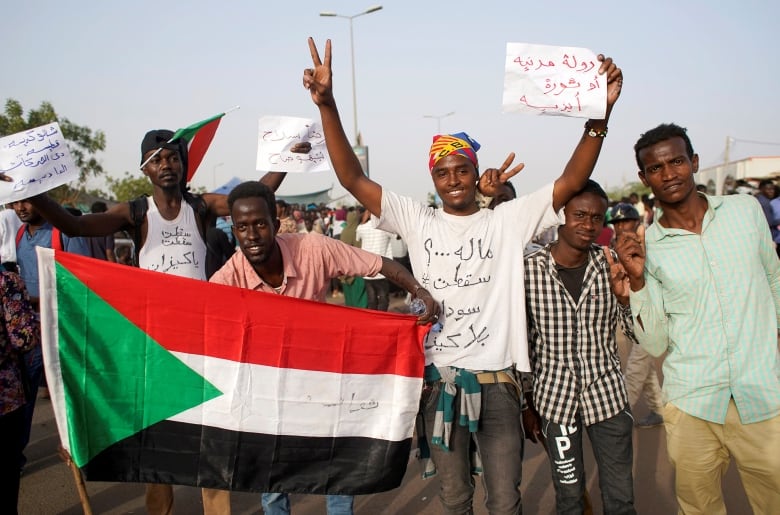 Sudanese demonstrators hold a national flag and chant slogans outside the Defence Ministry in Khartoum, the capital, on Thursday as they protest against the army's announcement Bashir would be replaced by a military-led transitional council. (Reuters)

GDP per capita is less than $4,500 US per year and the unemployment rate is 20 per cent, according to U.S. government data.

"These aren't just issues of economic hardship; it's the culmination of anger at the regime," Soliman said. "It's rooted in institutional corruption ... [and] huge spending on the security services at the expense of basic services."

Sudanese diaspora in Canada recount fleeing the African country and hope the ouster of the president by the military will lead to meaningful change. 2:10

Demonstrations intensified on Saturday amid commemorations of a previous uprising in 1985, bringing thousands more people into the streets, he said.

More than 50 people have died in the protests, according to rights groups. Thousands have been jailed.

How did the country get here?

Since winning independence from the British in 1956, Sudan has had two revolutions — one in 1964 and another in 1985. Popular protests helped overthrow military regimes during both of them. Periods of democracy, however, have been short lived amid uprisings and military coups.

Bashir came to power in 1989 after leading a coup organized by the National Islamic Front.

The U.S. designated Sudan as a state sponsor of terrorism in 1993 and launched sanctions in 1997. The following year, the U.S. launched missile strikes against a factory in Sudan that it accused of producing chemical weapons. 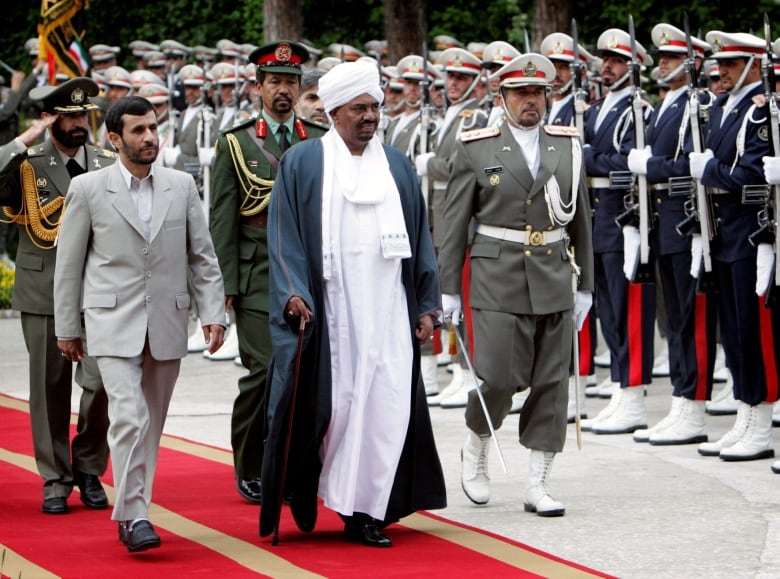 Oil exports began in 1999, providing the country with an economic lifeline. Most of the oil was extracted from the south, home to a separatist movement.

Ethnic violence in the country's western Darfur region beginning in 2003 led government forces and allied militias to carry out a campaign of ethnic cleansing against the area's non-Arab population, killing hundreds of thousands.

Rebels from Darfur and the government signed a peace deal in 2010, a year after the International Criminal Court issued an arrest warrant for Bashir for atrocities committed in the region.

Separately, South Sudan became an independent country in 2011, after residents voted overwhelmingly for secession in a referendum.

When it left, it took much of Sudan's oil production with it, although much of the crude is exported through facilities in the north. The two countries are still involved in territorial disputes.

The U.S. removed some sanctions on Sudan in 2017, but the economy did not improve.

Following protests and rising inflation, Bashir's government imposed a state of emergency in February this year.

What is the international community doing?

"Military takeover is not the appropriate response to the challenges facing Sudan and the aspirations of its people," Moussa Faki Mahamat, the chairperson of the African Union, said Thursday[1]

The African Union is the intergovernmental body tasked with facilitating diplomatic and economic co-operation among its 55 member states.

The African Union's ability to effect change on the ground, however, remains limited, Jones said.

The U.S., U.K. and Norway issued a joint statement[2] on Wednesday calling on authorities to stop using violence against peaceful demonstrators, free political prisoners, lift the state of emergency and deliver a plan for political transition. 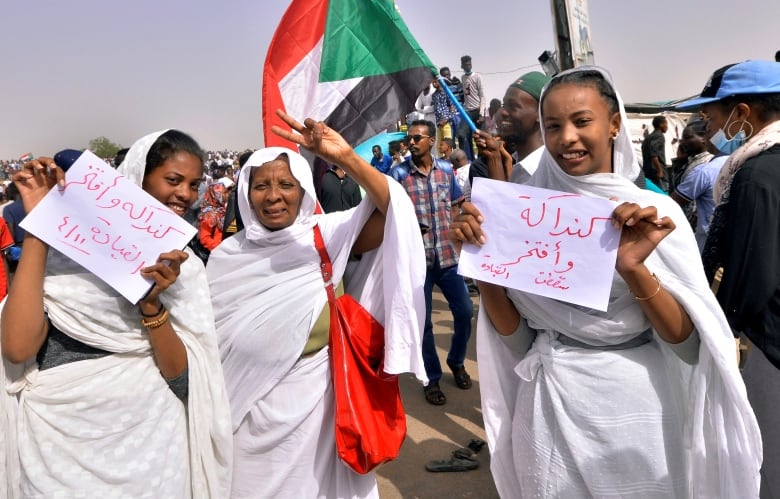 Canada closed its embassy in the capital, Khartoum, on Thursday and is advising against all travel to the country.

Canada participated in UN peacekeeping missions in Sudan's Darfur region and other parts of the country until 2009.

Canada has also participated in UN-mandated sanctions, including an arms embargo and travel bans against designated individuals.

Protesters have pledged to stay on the streets until the military announces plans to turn power over to a transitional civilian administration.

Having amassed power and money through patronage networks, it seems unlikely the security establishment will be willing to share power at present, Jones​ said.

Politically, following the replacement of state governors with military officials in February, and with a state of emergency imposed on the population, the military retains firm control over state institutions.

There could be a disconnect, however, between senior military officials and mid-ranking officers who are sympathetic to the demonstrators, Soliman said. The depth of these fissures remain unclear.

If pressure on the streets intensifies, he said security forces "will then have to decide what courses they take — and that could involve increased violence." People are seen in the streets of Khartoum after the televised statement by the defence minister on Thursday. (Noon Gailoub/Reuters)