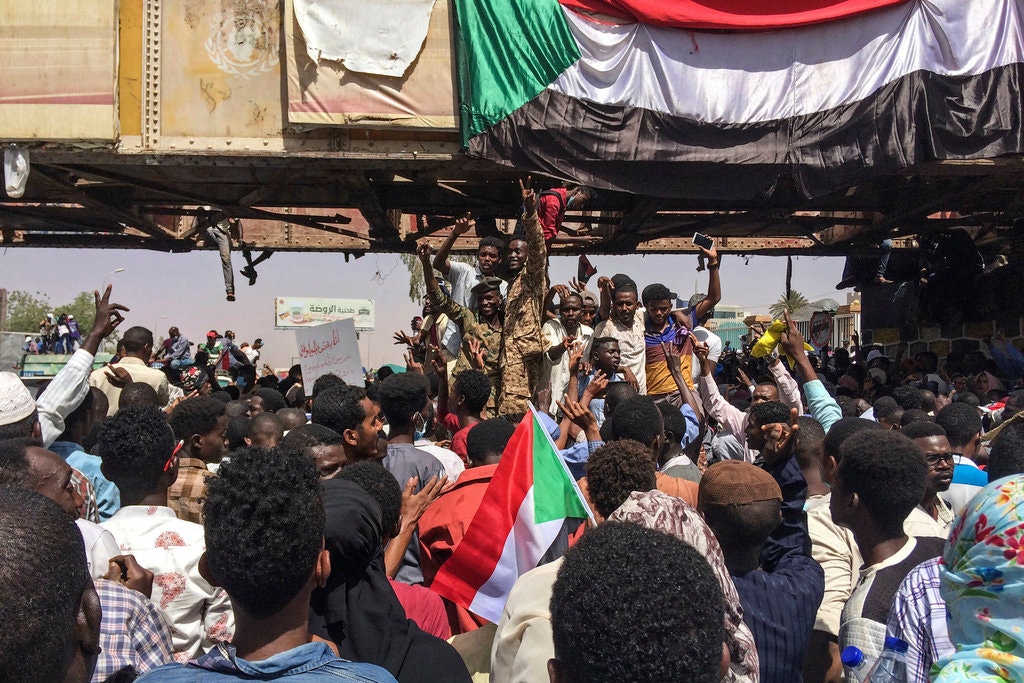 KAMPALA, Uganda — Rival security forces clashed in Sudan on Tuesday as huge crowds of protesters kept up their vigil outside army headquarters to call for the overthrow of the country’s longtime authoritarian president, Omar Hassan al-Bashir.

Seven people were killed on Tuesday, said Sara Abdelgalil, a spokeswoman for the Sudanese Professionals Association, which is organizing the protests.

The eruption of violence between different armed government forces is a major development in the four-month long protest movement against the president, said Magdi el-Gizouli, a fellow at the Rift Valley Institute, a think tank based in Kenya.

“In a way, it has been turned into an internal dilemma between security forces,” said Mr. el-Gizouli, who is Sudanese.

“The worse-case scenario is that this military security establishment breaks down and they fail to resolve what is now becoming a conflict within,” he added.

The intermittent fighting between different agencies within the country’s security forces raises concerns that Sudan could descend into anarchy. That fear is especially acute now because two neighboring nations — Libya and South Sudan — are convulsed by civil war and chaos.

The protests broke out in December over a surge in the price of bread and quickly escalated into the biggest challenge yet to the three-decade rule of Mr. al-Bashir. He came to power in a military and Islamist-backed coup in 1989 and for much of that time, he has been regarded as a pariah in the West.

Sudan became a haven for international terrorists in the 1990s — it hosted Osama bin Laden for a time. And Mr. al-Bashir is presently wanted on charges of genocide and war crimes by the International Criminal Court, which accuses him of playing an “essential role” in the atrocities that occurred in Darfur, a restive region in western Sudan.

During his reign, Sudan has known civil wars, famine and the division of the country after the south became an independent nation in 2011.

Tuesday’s outbreak of violence began sometime after 4 a.m. when paramilitary forces loyal to Mr. al-Bashir opened fire on the protesters in front of the army headquarters, according to one protester, a doctor in his mid-20s.

Soldiers who are part of the regular army opened up gates to allow protesters to get to safety within the large military compound that is not only home to army headquarters, but to Mr. al-Bashir’s residence as well, said the doctor, who asked to be identified only by his initials, A.M.E., citing safety concerns.

The army responded to the attack by the paramilitary forces with gunfire and they shot about six of them, according to the doctor, who provided a video of protesters huddled on the ground in the dark as gunfire sounded all around them.

Dr. Mohamed Eisa, a spokesman for the Sudanese American Physicians Association, said that about 22 people — including five soldiers — have been killed since the protests swelled on Saturday. Dr. Eisa, who is based in Cleveland, said his group’s tally is based on reports from doctors in Khartoum, the capital.

Ms. Abdelgalil, the spokeswoman for the protest organizers, said, “The positive emerging development is that some of the army forces are protecting the civilians.”

There was similar fighting between rival security forces early Monday as well, a different witness said.

After protests broke out in December, Mr. al-Bashir’s feared National Intelligence and Security Service sought to suppress them with tear gas, detentions, and sometimes live ammunition. By the middle of March, 60 protesters had been killed, according to the New York-based group Physicians for Human Rights.

The protests gained momentum over the weekend, when marchers chose a new demonstration route and reached army headquarters with little resistance. There they discovered that individual army soldiers guarding the compound were sympathetic. The army soldiers at times blocked the efforts of the National Intelligence and Security Service to disperse the protesters.

More people joined the sit-in, which has continued night and day since Saturday. At its height, organizers have estimated that hundreds of thousands of protesters have been in the streets.

Mr. el-Gizouli said that while the protesters in Khartoum may view the army favorably, the army is hardly a unifying force beyond Sudan’s heartland. Across the country’s periphery, the military has sown terror while fighting rebels.

“One must be reminded that it’s the same army accused of treacherous crimes,” he said.

During his long rule, Mr. al-Bashir has bolstered security forces outside the military’s command structures — which has prevented any one security organ from growing powerful enough to challenge him. He has built up the National Intelligence and Security Service and also supported the Arab militias known as janjaweed that have more recently been constituted as the Rapid Support Forces.

Those forces were seen moving into Khartoum in recent days and setting up roadblocks, according to witnesses.

The doctor who witnessed the shooting said that he had spoken to some of the soldiers who let the protesters take cover inside army headquarters, and it was clear these soldiers were acting against their orders.

The doctor added that one of the soldiers said he feared that all those who disobeyed orders will be executed if this movement fails.

In a joint statement[1] made through the United States Embassy in Khartoum on Tuesday, the United States, Britain and Norway called on the Sudanese authorities to respond to the demands of the protesters and prepare for a “political transition.”

“The Sudanese people are demanding a transition to a political system that is inclusive and has greater legitimacy,” the statement read. “The Sudanese authorities must now respond and deliver a credible plan for this political transition. Failing to do so risks causing greater instability.”

We have 367 guests and no members online