Since 1992, humanitarian organization Medair has been one of the most active relief organizations in what was then southern Sudan, responding to sudden emergencies such as mass displacements, high levels of child malnutrition and outbreaks of highly contagious diseases.

Medair CEO David Verboom first visited the region 18 years ago. He returned for the first time, to what is now South Sudan, in December to see how Medair's relief operations have been going since the revitalized peace deal was signed in September. When he traveled to the former Unity state, he said he found both good and bad developments.

"They're not able to get out of the political turmoil, all the challenges they're facing. The environment is very basic. Development is hardly happening. It's still mainly relief and humanitarian aid," Verboom told South Sudan in Focus.

On the positive side Verboom said, he witnessed the incredible resiliency and capacity of local Medair workers.

"Twenty years ago, we were not able to run a nutrition center or clinic by South Sudanese. We always had to bring in expatriate [foreign] staff. Now, like when I was visiting Unity state, the local staff has grown in capacity. They are running the program, and they are very committed, very knowledgeable," Verboom told VOA.

"Six million people, especially women and children, are food insecure, so you will find malnourished children throughout the country," said Verboom. 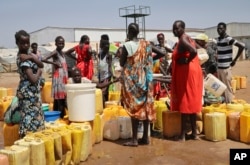 FILE - Residents of a camp for the internally displaced line up to get water from a borehole, on the outskirts of Juba, South Sudan, Jan. 22, 2019.

Medair also expanded a program in South Sudan called WASH, or Water, Sanitation and Hygiene, which brings quality water and water sources to the South Sudanese.

"We do a lot of drilling of boreholes, filtering, providing healthy water, and of course sanitation because there are so many waterborne diseases in South Sudan," Verboom told VOA.

When asked why the government does not provide more basic services to its own people, Verboom responded, "It's a huge country but still there is only, like, 300 kilometers of paved roads. To the places where we're working, you have to go by small planes, so you start from scratch."

He said a South Sudanese colleague told him that after living in Khartoum since 2011, he returned to the former Unity state with his family "because people were so hopeful that now, finally, South Sudan got independence." But like thousands of others, his friend was forced to evacuate his family in 2016 because of renewed fighting that flared in Juba, leading to the displacement of millions of people and hundreds of civilian deaths.

Verboom said he met a woman south of Unity state with four children whose husband was killed in the war, who told him she spends most of the day collecting water lilies to feed her children because there is nothing else to eat. He said she walked three hours to reach the Medair clinic in former Unity state.

"We need to support what we can. We need to continue to build capacity, to stand next to people, hoping and praying that stability will return," Verboom told VOA.

We have 452 guests and no members online