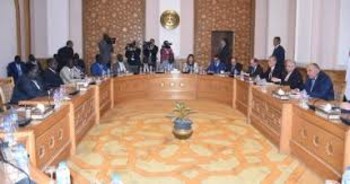 A high-level delegation of South Sudan peace partners on Monday arrived in Egypt to seek logistical support for security arrangements.

Peter Mayen Majongdit, member of the committee tasked with the oversight of the implementation of the activities of the pre-transitional period, confirmed to Radio Tamazuj Tuesday that they had arrived in Cairo.

“We came to follow-up on the pledges made by the Egyptian government during the peace celebration in Juba. They pledged to support us in the area of cantonment of forces and matters relating to security arrangements,” he explained.

The opposition official further said they will be meeting with officials from Egypt’s government to lobby support for peace implementation in South Sudan. “Egypt is a strategic partner to South Sudan and its government is committed to support us,” he said.

“As South Sudan leaders, we will look for support everywhere so that the peace agreement is implemented,” he stressed.

Majongdit noted that much support for the security sector in needed urgently, as the issue of security arrangements remain blurred and not properly sorted out.

He pointed out that the parties plan to train a unified army before a new unity government is established in May 2019.

But the parties are now facing a time crunch and funds, as the agreement provides for a transitional government to assume power in May.