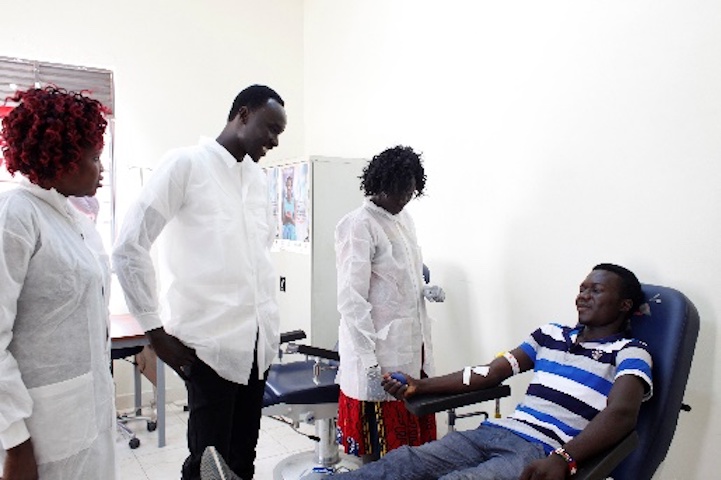 When rebel fighting flared in South Sudan in 2013, two years after the country gained independence, hospitals were suddenly overwhelmed with patients with gunshot wounds across Juba in desperate need of blood.

But not a drop was available for transfusion.

Instead, the injured mostly relied on donations from family members – and even then it proved difficult to persuade relatives to donate blood. Eventually, the President of Kenya, responding to a call from the Government of South Sudan for help, sent blood from his nation.

“During the crisis in 2013, there was a lot of demand for blood,” says Dr Lul Lojok Deng, Director General of the Public Health Laboratory and National Blood Transfusion Services at the South Sudan Ministry of Health. “But there was no stockpile of blood back then, so many people died because of the lack of blood.”

This crisis galvanized the Ministry of Health and partners, including the World Health Organization (WHO) and the Government of Japan, into action, launching the National Blood Transfusion Services in Juba in July 2014 and producing the National Blood Transfusion Policy and Strategic Plan by November 2015. Recently, the Government of Japan provided WHO South Sudan with an additional $US 712 500 and some of the funds are earmarked to support universal access to blood and transfusion safety.

Since then and despite enormous logistical and cultural challenges, South Sudan has been making steady progress in expanding its blood transfusion services.

Now, in addition to the blood transfusion centre that was established in Juba in 2014, there is a regional centre in Wau, in the north-west of the country, with another soon to open in Malakal in the north-east.

“Japan is very proud to support the blood transfusion programme in South Sudan because it’s a very important programme within the heath sector,” says the Ambassador of Japan, Seiji Okada. “People in South Sudan always suffer from lack of blood and because of the situation many people die. Japan supports this programme to save the lives of women, men and children.”

Another major achievement has been the increase in blood collected from voluntary donors.

According to WHO guidelines, 1% of a country’s population needs to donate blood to meet annual requirements. Under this principle, South Sudan should be collecting an estimated 120,000 units for its population of about 12.9 million people.

However, the country continues to struggle with a chronic shortfall, due in part to a health system that is weakened by lack of investment and human resources. It also relates to cultural issues – many South Sudanese believe that giving blood will make them ill.

“In some communities, people don’t believe in giving blood because they think that when they donate they will fall sick or even die,” explains Dr Charles Ocan, Health Policy Advisor and Team Lead for the Integrated Service Delivery Cluster at WHO South Sudan. They are also worry that their blood might be misused.

Sustained efforts to educate the public led to South Sudan participating in World Blood Donor Day for the first time in 2015. The number of voluntary, unpaid donations is growing.

When collections started in 2014, only 23% of the blood donated came from South Sudanese donors. In 2018, it had jumped to 35%. The rest was donated by other nationals.

“A lot of people are suffering because they are in need of blood,” said Moses Alfonse, one of the new South Sudanese blood donors in Juba. “Mothers who give birth may need blood, and victims of road accidents need blood. So, this blood that I donated will save their lives.”

WHO also used the funding from the Government of Japan to develop blood transfusion protocols and procedures, in addition to building up the skills of staff in areas of donor recruitment and selection, laboratory procedures and proper use of blood.

“There is a critical shortage of human resources in this country, so WHO has worked closely with partners at the national and subnational levels to ensure that staff are trained on the components of blood transfusion,” says Dr Joy Waya, Health Systems Planning Officer within the Integrated Service Delivery Cluster at WHO   South Sudan. “This has, in turn, increased the quality of services being offered, such as the screening of blood and blood transfusion services and the rational use of blood and blood products in health services delivery.”

Amat, a 32-year-old mother expecting her fifth child, recently had a blood transfusion at the teaching hospital in Wau. She was diagnosed with severe anaemia and had a transfusion two days later. Anaemia during pregnancy is linked to low birth weight, premature birth and maternal and infant death.

“I suffered from fatigue and dizziness,” she said. “But all those symptoms have now disappeared.”

We have 132 guests and no members online