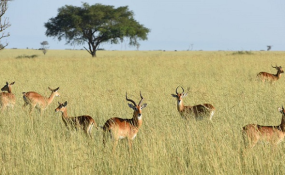 Wajaras, alias Rom Okeny Grace, was arrested, by Uganda Peoples Defense Forces-UPDF soldiers, from Palabek Kal Sub-County in Lamwo district while in possession of two antelopes and an SMG assault rifle with 16 rounds of ammunition, according to Maj. Caesar Olweny the UPDF 4th Division Spokesperson. Olweny said that Wajaras is still under military detention in Gulu pending clearance.

Lamwo Resident District Commissioner James Nabinson Kidega says that the suspect was caught with two antelopes he had killed during a hunting trip. Antelopes, one of the endangered species in the wild are harvested for food and sometimes for traditional medicine.

Kidega told URN that the South Sudanese delegation comprising of Magwi and Ayachi County Commissioners came to Uganda in December 2018 requesting for his release. According to Kidega, the envoys were told by the UPDF leadership to write a formal letter requesting the release of the singer.

Magwi County Commissioner in South Sudan Ochola Bosco Oringa, the said Taban known by his stage name 'Wajaras Suspect' disappeared on December 12, 2018, after stealing a gun from his brother, a member of the South Sudanese People's Liberation Army - SPLA.

Ochola added that a number of South Sudan nationals are ignorant of the law and apologized for his subjects' conduct, while in Uganda.

We have 192 guests and no members online