Sudan worshippers turn on imam over protests against President Bashir 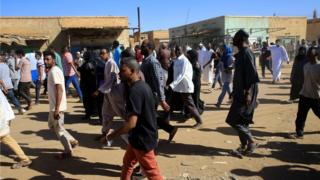 An influential Sudanese imam had to be removed from a mosque in the capital, Khartoum, after worshippers confronted him for not leading protests against embattled President Omar al-Bashir.

In a video shared on social media, a man appears to shout at imam Abdul Hai Yusuf, who often backs the government: "Get up and lead us from this mosque!"

A frantic crowd then chants "downfall [of the regime] only".

Three weeks of demonstrations have left 22 people dead across the country.

The protests, initially against the rising cost of fuel and bread, have morphed to calls for Mr Bashir to step down to end his 30-year rule.

What happened on Friday?

A video shared on Facebook appears to show a member of the Khatim al-Mursaleen mosque challenging Mr Yusuf, a Saudi-educated imam.

Mr Yusuf, who is known for encouraging his followers to march in solidarity with Gaza or Syria, had to be whisked from a door near the pulpit.

He has previously appealed to the government to exercise restraint in the current unrest.

Another video shows crowds chanting outside the mosque.

The authenticity of the videos could not be immediately verified.

Friday's protests in Khartoum and nearby Omdurman appeared to draw more people than before and were more widespread, Reuters news agency reports.

Security forces chased the demonstrators but there were no immediate reports of casualties.

Why are people protesting?

Demonstrations began on 19 December after the government announced price rises for fuel and bread.

The protests have escalated into broader calls for an end to the rule of President Bashir, who came to power after a coup in 1989. Activists accuse him of mismanaging the economy.

Over the past year, the cost of some goods has more than doubled, while the Sudanese pound has plunged in value.

Three-quarters of Sudan's oil income was lost after the country's southern half voted to secede in 2011, leading to the formation of South Sudan.

Its economy has also been strained by over 20 years of US sanctions[1], which were lifted in October 2017. The US had introduced economic sanctions after accusing Sudan of sponsoring terrorist groups.

In 2009 and 2010, the International Criminal Court (ICC) charged him with several counts of genocide, war crimes and crimes against humanity, and a warrant was issued for his arrest.