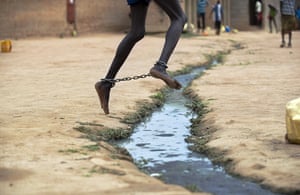 Children are among those being executed in South Sudan[1], in an “extremely disturbing” escalation of the state’s use of the death penalty, according to Amnesty International.

This year, seven people, including one child, were hanged, the highest number since the county gained independence in 2011 , according to evidence provided to Amnesty by legal professionals and government officials.

In 2017, two of the four people executed were children at the time of their conviction, the organisation said.

Amon the 342 people currently on death row – more than double the number recorded in 2011 – are a secondary school pupil, who was sentenced to death when he was 15, and a breastfeeding mother. The country’s lack of transparency on its use of the death penalty meant the figures were likely to be underestimated, Amnesty said.

The rise in executions is happening at a time when the worldis moving away from death sentences.

Joan Nyanyuki, Amnesty International’s east Africa director, said: “It is extremely disturbing that the world’s youngest nation has embraced this outdated, inhuman practice and is executing people, even children, at a time when the rest of the world is abandoning this abhorrent punishment.

“The president of South Sudan must stop signing execution orders and end this obvious violation of the right to life.”

More than 100 countries, out of 195 globally, have abolished the death penalty. South Sudan and Somalia were the only countries in the region that carried out judicial executions in 2017.

Philip Deng* was found guilty of murder when he was 15, following a trial in which he did not have any legal representation. Deng claims the crime was an accident.

Deng, who will turn 17 in December, said: “Before the accident, I was in secondary school. I was a runner, a very good one, and I was also a singer of gospel and earthly songs … My own aim was to study and do things that can help others. My hope is to be out and to continue with my school,” he said.

Deng, who said he told the judge he was 15, was sentenced to death by hanging on 14 November 2017. He finally gained access to a lawyer, who appealed against the court’s decision. He was transferred from Torit state prison to Juba State central prison in September and is awaiting his appeal.

Since independence, 140 people have been sentenced to death and at least 32 executed. The country, which allows the death penalty for crimes including murder, terrorism, drug trafficking and treason, has carried out executions every year since it acquired independence, except for 2014, when Amnesty did not record any.

An inmate with shackles around his ankles skips over an open trench at Rumbek’s central prison in South Sudan. Photograph: Tony Karumba/AFP/Getty Images

This year’s spate of executions appears to have been prompted by a directive by the director-general of South Sudan’s national prison service on 26 April, in which all death row prisoners held at county and state prisons were ordered to be moved to two of the country’s most notorious prisons – Wau central prison and Juba central prison.

South Sudan, which has been embroiled in a civil war between forces loyal to President Salva Kiir and rebel groups since 2013, signed a peace accord[2] in October.

Two prominent individuals, James Gatdek Dak and William Endley, who had been sentenced to death for their part in the conflict, were pardoned by Kiir and released on 2 November. Dak, a former spokesperson for the Sudan People’s Liberation Movement/Army-In Opposition, was sentenced to death by hanging for treason on 12 February. Endley, a former adviser to Riek Machar, chairman and commander-in-chief of the SPLM/A-IO, was convicted and sentenced to death on 23 February for conspiracy to overthrow the government under the National Security Act.

Before a person sentenced to death can be executed, the supreme court and the president must confirm the death sentence.

In all, 23 countries carried out 993 executions in 2017, with nearly 22,000 people on death row; worldwide, there was a small drop[3] in the number of executions carried out.

In 2017, there was a significant decrease in death sentences imposed across Sub-Saharan Africa.

We have 464 guests and no members online