The five-year war in South Sudan is among the deadliest the world has seen in recent years, according to a new analysis by researchers from the London School of Hygiene and Tropical Medicine.

The authors of the report, which was funded by the United States Institute of Peace, hope the new analysis will help to illustrate the true human cost of the war and give a renewed impetus to peace talks and humanitarian funding.The civil war in South Sudan erupted in December 2013 as rebels took up arms against the government. A peace agreement signed two years later broke down and the conflict spread. Fighting has continued, despite another ceasefire deal signed last month.

The conflict has caused about 382,000 excess deaths, according to the report.

​Most of those killed were adult males, though women and children also contributed to the figure, says lead author Professor Francesco Checci.

“We were surprised at the extent of violence – the proportion of deaths that were actually due to people getting killed. I think this places South Sudan more broadly on a par with the likes of Syria and Iraq as opposed to other sub-Saharan African conflicts that we have seen in the past,” Checci told VOA.

A statistical model was then used to estimate the death toll attributable to the war, covering not only violent deaths, but also deaths caused by a lack of healthcare, food shortages or disease caused by the conflict. 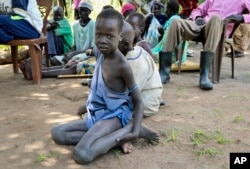 In this photo taken Friday, Aug. 17, 2018, a young boy sits on the ground watching an aid distribution by Oxfam on the island of Nyajam, off the mainland from the opposition-held town of Nyal in Unity state, in South Sudan.

“They have actually been shown in many different armed conflicts to be sometimes the majority of deaths attributable to the crisis,” notes Checci.

The researchers say their findings show the urgency of a resolution to the conflict. They also hope the analysis can inform the humanitarian response in South Sudan, one of the largest such operations worldwide.

Humanitarian agencies are seeking $1.7 billion to meet the country's needs this year, but that figure is only half funded, according to the United Nations.

“I’m hoping that by putting fairly concrete, objective, hopefully scientifically credible numbers around some crude metric over the level of suffering and impact that these crises have on people, we’re actually going to be able to influence that broad global commitment to humanitarian financing,” says Checci.

The researchers now hope to apply the statistical technique to other African conflicts, starting with the Nigerian government’s war against Boko Haram Islamist militants.

We have 967 guests and no members online