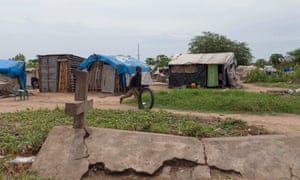 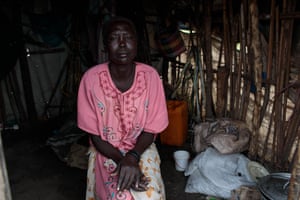 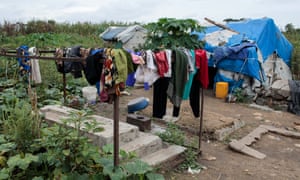 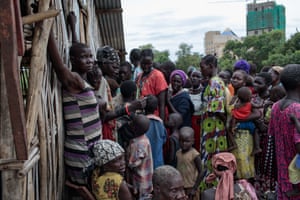 Shielding her eyes with one arm, the frail, 50-year-old Rose Juan glances at the tombstone outside her makeshift house. “I see ghosts in my dreams,” she says. For half a decade, the mother of five has been living among the dead. Time hasn’t eased the eeriness that engulfs her home.

Juan is one of thousands of homeless people in South Sudan’s capital, Juba. With nowhere to go, she has been forced to take up residence in the city’s graveyard. “Sometimes men, women and children greet me and ask: ‘Why are you living on top of us?’” said Juan of the ghosts that haunt her sleep.

It has been nearly five years since civil war erupted in the world’s youngest nation. Fighting between President Salva Kiir’s government troops and forces loyal to Riek Machar, the former vice-president, shows no signs of abating[1]. Mass displacement, starvation[2] and allegations of war crimes continue, plunging the country deeper into despair[3].

Seven years ago, Juan and her family travelled from the small town of Terekeka to Juba in search of help. “My husband is mentally ill and he couldn’t provide for us,” says Juan. She thought coming to the “big city” would yield greater opportunities.

When she first arrived, she lived with her family along the Nile, joining thousands of other desperate people from Terekeka’s Mundari tribe, who came in search of food and assistance during South Sudan’s second civil war.

However, when the comprehensive peace agreement was signed in 2005, putting southern Sudan on the path towards independence, foreign money began pouring in. The Mundaris were told to leave to make room for new hotels and businesses along the waterfront.

The cemetery’s residents say the government told them to go back to Terekeka and refused to provide them with land. Not wanting to return to the desolation they had fled, thousands of people moved into Saint Mary’s cemetery.

The graveyard, concealed behind a long brick wall, has – over the past 10 years – become a sprawling, filthy shantytown in the middle of the capital. Flimsy plastic tents line the muddy ground, while the hard surfaces of tombstones are used for drying clothes or storing household items. Children play on the jagged edges tombs and adults continue to bury the newly deceased in nearby plots.

Those dwelling in the city’s graveyard have effectively been disowned by the South Sudanese government. Photograph: Bruno Bierrenbach Feder

Most of Juba’s population, including local and international aid agencies based in the city, have no idea there are so many people living in squalor behind the wall.

The cemetery’s residents say they feel abandoned. “The government hasn’t helped us,” says Cecilia Grak, 50. Ten years ago, the mother of eight “heard of a place called Juba” and came from Terekeka looking for food. She tried to squat on other people’s land but, when she was repeatedly kicked off, she sought refuge in the cemetery. Today she eats scraps of discarded food she finds in the market.

South Sudan’s government wants little to do with the graveyard dwellers. The official view is that they are living there illegally and the authorities are under no obligation to help. “They’re not our problem,” says Johnson Swaka, chief executive officer for the city of Juba.

Only one local aid group is providing assistance to the cemetery’s 3,000 inhabitants. Humanitarian workers say that, since the onset of war, things have become worse.

“There’s no work, and whatever little money people get they spend on drink,” says Martha, one of the social workers operating in the cemetery. The Guardian is using only her first name to protect her identity.

She says South Sudan’s economic crisis has left people without jobs, which has fuelled alcoholism and caused a spike in sexual violence and domestic abuse.

Martha’s organisation has been working in the cemetery for the past five years, providing 600 children with money to go school, as well as support against gender-based and domestic violence. Yet, she says, the atmosphere can be volatile at times, with drunkenness often prompting people to turn on those trying to help them.

Civil society groups are calling on the government to do more for its people by providing land to live on that is “affordable or free”. “The ongoing violent conflict in South Sudan[4] has made the economy worse for ordinary citizens,” says Edmund Yakani, executive director for the Community Empowerment for Progress Organisation, a local non-profit advocacy group. Yakani says people can’t afford daily living expenses, let alone housing.

Lawmakers in Juba doubt anything will change. “These people are seen as dead bodies,” says a member of parliament who asked not be named. “They’re not counted as human beings.”

We have 393 guests and no members online