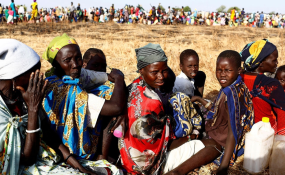 The analysis by the Vulnerability Assessment and Mapping (VAM) pointed out that depreciation of the local currency, rising cereal prices and shortages of imported commodities on local markets were affecting the food security of households and increasing vulnerability.

VAM assessed 247 households in 22 counties and established that families in Torit, Bor South and Yambio and in Munuki area in Juba town, had a high prevalence of inadequate food consumption.

According to the latest market price analysis, macroeconomic crisis and hyperinflation continue to diminish households' purchasing power, leaving more people hungry in a country where 7 million people were food insecure at the peak of the lean season.

Over 50 per cent of households reported poor or borderline consumption. In Bor South in Jonglei State, the report says, households were resorting frequently to negative coping strategies to meet their basic food needs.

"Overall, surveyed households are mostly relying on starches and vegetables to meet their daily food needs. Proteins and pulses were consumed once or twice a week by 60 per cent of households, with more than 75 per cent of reported consuming no fruit or dairy products at all," the VAMS report says.

Humanitarian agencies also recently reported restrictions of access to some areas in Equatoria by the government forces.

The South Sudan monthly consumer price index rose by 9.9 per cent from July to August 2017, according to the National Bureau of Statistics.

In August, the year-on-year inflation rate in South Sudan reached 165 per cent following the persistent rise in food prices, and the average exchange rate was 165 South Sudanese Pound (SSP) to the dollar in the Juba parallel market, while the official rate was 118 SSP.

According to the South Sudan Market Price Bulletin, the parallel market exchange rate stood at 39.4 per cent above the official one, reaching the highest divergence since 2016.

The US Special envoy to the UN, Ms Nikki Haley, who visited South Sudan on October 26, warned the Juba leaders to end fighting immediately or risk being punished.

Ms Haley made it clear that the US was growing impatient with President Salva Kiir and no longer trusted the Juba administration.

"We are disappointed by what we are seeing. This is not what we thought we were investing in," she said.

"What we thought we were investing in was a free, fair society where people could be safe and South Sudan is the opposite of that now," she added.

Ms Haley further said President Kiir was not caring for the suffering of the people of South Sudan.

She said the turbulent economic crisis hitting the young nation was as a result of the ongoing war.

President Kiir recently acknowledged the suffering of the South Sudanese and blamed the continuing violence.

We have 285 guests and no members online