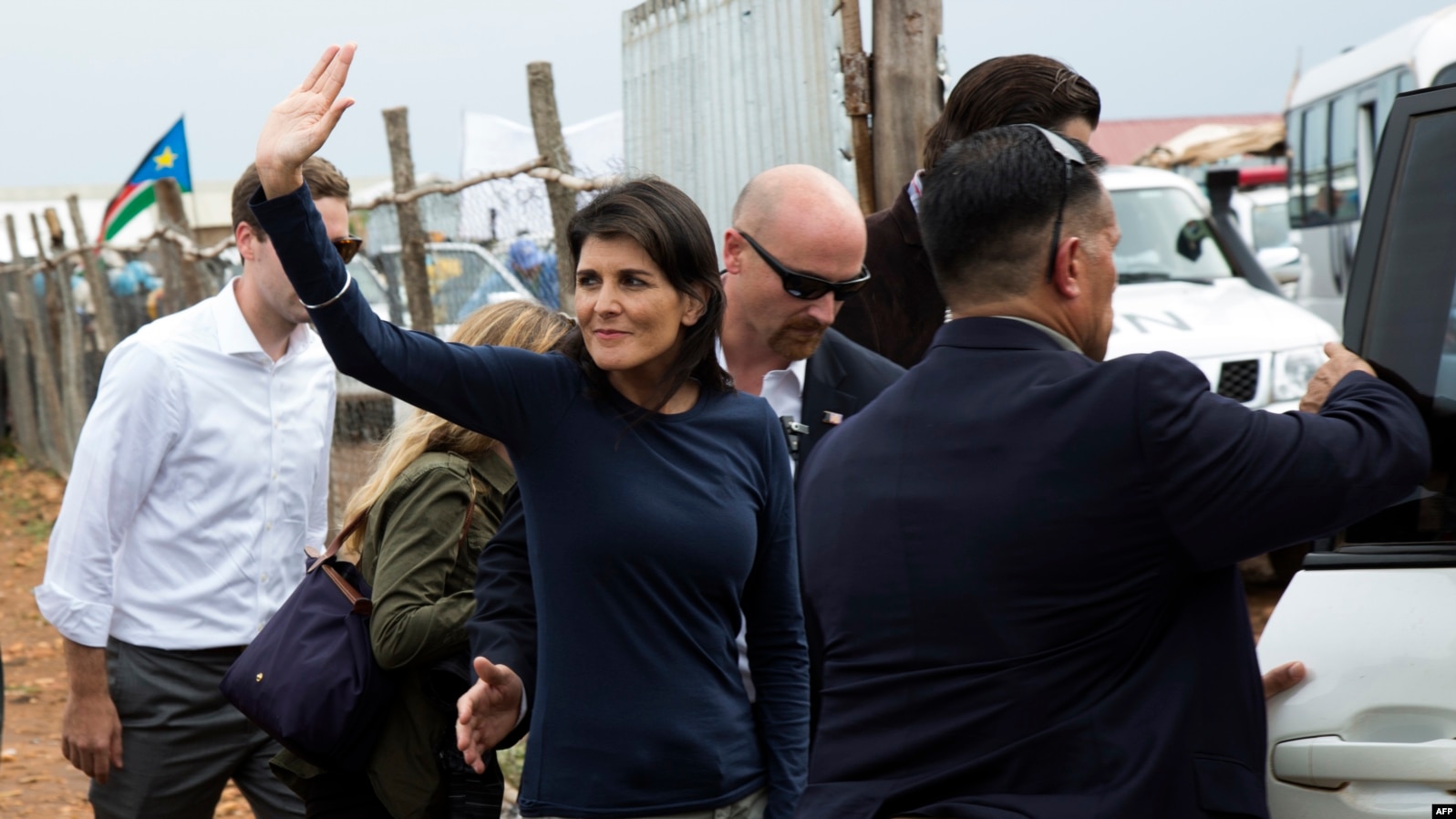 US Ambassador to the UN, Nikki Haley waves towards Internally Displaced People (IDP) while being evacuated by her protection force following a demonstration in Juba, South Sudan, on October 25, 2017
JUBA, SOUTH SUDAN —

Residents of a displaced persons camp in South Sudan say they were deeply disappointed when a visit by U.S. envoy Nikki Haley was cut short Wednesday, with several residents accusing the French charity that runs the camp of preventing Haley from seeing their wretched living conditions.

Officials said at the time that Haley's visit to the UNMISS (United Nations Mission in South Sudan) camp in Juba was cut short because of security concerns over a turbulent demonstration against President Salva Kiir. The cancellation sparked a second demonstration among the residents to express their anger over not being able to meet Haley, the U.S. ambassador to the United Nations.

But some of the IDPs charged this week that organizers of the visit who work at the camp did not want Haley to see the miserable conditions in which they live. The camp hosts more than 30,000 internally displaced persons (IDPs) who fled their homes because of a civil war that began in 2013.

Tut Albino, deputy chairman of one portion of the camp, told VOA's South Sudan in Focus that he and other residents anxiously hoped to meet Haley and ask her to help bring peace to the country.

Albino said residents were angered when the French charity ACTED, which operates the camp, canceled the encounter.

He accused ACTED of bringing a woman who lives outside the camp to represent the IDPs in a meeting with Haley, denying the real residents the chance to express their concerns.

“They prepared her with four children and they said this is the mother of the orphans that can talk on behalf of the community here in the camp. After the community realized that, it made them react too much,” said Albino.

VOA repeatedly tried to seek a response from ACTED’s office in Juba without success. A representative in ACTED’s Paris office said on Friday that everyone who could speak to the allegations made by the IDPs in Juba was busy and not available until Monday.

James Mabor, another resident of the camp, charged that ACTED did not want Ambassador Haley to meet the IDPs because they are not well cared for. He said some are wearing the same clothes they wore when arriving at the camp four years ago, and others are down to rags and blankets.

He said ACTED has not fulfilled its obligations to the IDPs.

“Suddenly [they] realized it fell short of some obligations which involve providing cooking utensils, clothes, blankets and so on,” he told South Sudan in Focus.

“The clothes you brought along with you three, four years ago would be worn out but if you don’t have an alternative you are bound to wear them then you look shabby. So all these people came out and were in the street in the camp here and ACTED didn’t want that,” said Mabor.

He added that ACTED was supposed to clean the latrines before Haley’s visit but complained that the compound “is really smelly because they have not been cleaned for some time.”

Hundreds of South Sudanese lined the roads of the camp as Haley’s convoy approached the area. The U.N. released a statement saying many gathered outside of her meeting with reunited families to chant and call for peace.

South Sudan was the middle stop in a three-nation African tour for Haley, who returns to the U.S. this weekend.