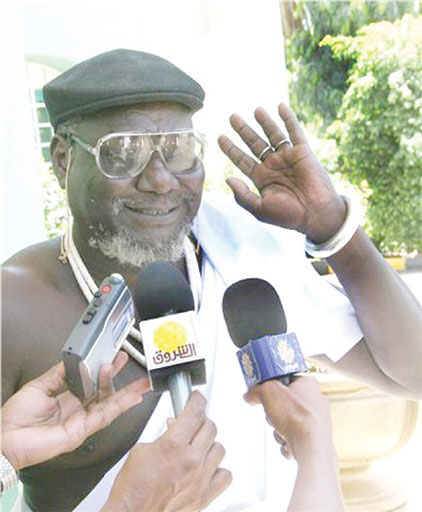 In the previous articles or texts, viewers or readers might have come across opinions like Pagan Amum, Lam Akol, Adwok Nyaba’s unity that may be needed in order to peace and secure Chollo Kingdom, but those contexts have remain in their past because they don’t play very significant role to achieve unity amongst Chollo and other communities; their unity is a non-achievable one, no matter how hard Chollo or communities may try as hard as they can to persuade others to make the unity between Lam Akol, Pagan Amum and Adwok Nyaba happen; they might have an unresolved political situations which may not be phrase here.  Meanwhile, Chollo have a lot of PhDs. Holders and Master Degree graduates, they can armor Rädhø mi Chollo and the disputed territorial issues can be put to an end for security, settlement and growth amongst all Chollo, Chollo community, Chollo people and other ethnicities as well.

Meanwhile, mixing issues could always causes confusion and long time to negotiate and resolve.  Instead of mixing Chollo Kingdom issues with Riek Machar’s war of position, there could be a better way to end conflicts in Chollo Kingdom and on Chollo land specifically.  This could just be the beginning to discover who Chollo really, how they accept people and the life around them.  As for Chollo, finding a better solution to end all conflicts which are facing Chollo people and Chollo kingdom in general is what could have been initiated because unity amongst Lam Akol, Pagan Amum, and Adwok Nyaba has failed not only Chollo people, but whole Sudanese societies.  Co-existence with other communities could have been the first step before digging into dirt for the treasures of unity amongst Lam Akol, Pagan Amum and Adwok Nyaba who have never been united by politic from the beginning.  Waiting for their unity will take Chollo people and Chollo kingdom forever in vain.  Lam, Pagan and Adwok are politicians who are proud in their fields, and they dedicate not their time on the outstanding issues of Chollo Kingdom and affairs like those.  For this matter, Rädhø mi Cøllø is still the lead when it comes Chollo Kingdom.  So, Chollo have to stick with their Rädhø, no matter what could be the end point.  Sticking with Rädhø mi Cøllø could mean opting for what Rädhø has managed to resolve; if Rädhø suggest that Chollo Kingdom should go for war with the land invaders and to avoid being colonized, Chollo people have to pick up arms and fight back to resist land robbers and invaders alike.  Sounds good idea, but need more 50/50 or <50/50 sacrifices.  Since Rädhø mi Cøllø plays a very important role to keep Chollo, Chollo people united, apart from what Lam Akol, Pagan Amum and Adwok Nyaba desired on the ground, here comes the time Chollo people unite and support Rädhø mi Cøllø’s decision in order to safeguard and keep Chollo, Chollo people with other community in peace at home and abroad, because the world of today is not going back to yesterday’s life.   The world is developing and therefore the people of Chollo, Chollo and other communities need to develop too.  They need to prosper and advance too.  “War is not the right tool to end conflicts” as it might have been heard from other thinkers.  So, putting military hardware aside and seek civilians’ peace and security could be the right ideology to make people at home and abroad feel at ease.

It is time to learn from Rädhø Kwöngø Daagø Pedyëdø as a land master, and look to President Salva Kiir for security advises since blames are always going to hit the government which Salva Kiir has been leading even though Salva Kiir did not make a decision of war against civilians.  Land issues between Chollo people and other communities do not need People Salva Kiir participations since Salva Kiir’s homeland is Bhar Al Ghazal and Chollo people have no land disputes with Bhar Al Ghazal.  Confusing Salva Kiir’s inside war with Riek Machar’s war is another matter which could lead every citizens to be confused.  Kiir is fighting to defend the sovereignty of the nation, but Riek Machar and his war are fighting for the position which he (Riek Machar) has lost due to his lack of experiences and skills on how to be a government of the people.  Even though other might have reacted differently in the past, when war broke out amongst different Sudanese (Southerner) rivals, there is still more than 100 years of land conflicts between tribes which neighbor Chollo Kingdom.

Others might suggest that the land issues is only between Apadang (Pandang-Dinka) in general and Chollo people, but in real sense, not all Pandang are involved in grabbing Chollo land.  Some societies amongst Dinka have wanted to live together with Chollo, but the greedy ones of them are the only toxics which end up destroying the good relationship between Chollo-Pandang (Dinka).  Due to other factors such as tribalism and political warfare, the bad Dingjol/Ngok or the bad Paweny (who might have not been permitted to reside in Chollo Kingdom due to their crimes against Chollo Kingdom) always end up using their innocent Jieng brothers, in-laws, sisters and/or friends to destroy the co-existence in peace between two communities.  On the other hand, some may assume that Nuer are attempting to take Chollo land on the eastern bank of the Nile River.  Like what Gabriel Tang Ginya has been doing for some good years of his Barget/Nyigat career.  Tang Ginya is a very bad example of peace when it comes to land issue resolutions – if there is any blame about his released in military prison in Juba, heads and eyes should be turned at Johnson Olony, who demanded Tang Ginya’s released and re-armed him with the weapons he has re-used to control and continue invading the land of Chollo and Chollo Kingdom on the east bank of the Nile River.

Taking a better look at today’s Tang Ginya advancement on the east bank on Chollo land, Fanjak is far away from Pangak – which Tang Ginya has renamed as “New Fanjak.”  Wiech-Mabor?  No no that does not even make a proper way to claim other people’s land.  It is “Dolieb Hill” “Dolieb.”  Atar, Piji, Akoka counties are okay to be counties, but could with some mechanisms in place and exception such that every citizen of the know Sudan (South or North) has a right of residential land and farm land, and whole land ownership still belong to the owners, the Chollo people; it is Chollo to give a residential land and farm lands to beloved Dinka or Nuer.  If it is not settled that way then, the conflict of land is still an ongoing conflict.  A mystery that could never be resolved without involvement of guns, but war is bad; really, war is worse in every situation. The same systems could be applied to Tang Ginya and his people who have been making Chollo land a place of their wars.  Coming to the place like Atar, the old Nyigat or Braget’s road on the south bank of Atar tributary is the border between Chollo land and Dingjol/Ngok; leaving Atar tributary with Chollo, but as people has come to learn the value of water, Dingjol/Ngok could live and be given land of residency and farm land on the south bank of Atar tributary.  Dingjol could have residential land and farm land on the south bank of Atar tributary.  Before reaching at the junction of Atar tributary and the Nile River, Dingjol/Ngok land clam could cease at Tyel Chwa (Tharshuey) as usual because that other piece of land belong to Obango.  Heading to Piji and areas, another old Nyigat/Barget road/track on the south bank of Nyiitho tributary.  At thaa thäww, on the south bank of Nyiitho tributary, Dingjol/Ngok could own both residential and farm lands as well and without causing any trouble to Chollo Nyiitho.  The same condition at Piji (Canal), Baliet, Akoka, and all the way to Chollo land in far north-Chollo land on the eastern bank of the Nile, include the one on the Sobat River.  This could be the only way to ease tension between those three communities.  It is only by providing the Dinka-Pandang and Nuer-Fanjak some Residential land and farm land with some sort of mechanisms put in place and exception of not demanding the remain piece of the land as theirs, but leave with Chollo who are the ideal land owners.

People need to heal as it is willingly acknowledgeable that there are some Nuer who cannot live together with their Nuer brothers and sisters in peace, but they favorite living in a peaceful ground they can find.  Dinka-Pandang too do live similar situations; some of whom do suggest living closed enough with Chollo, unlike with their other Dinka brothers and sisters.  Same parallel condition could be found with Chollo and other Sudanese.  Doing as it given to thee in peace and love, but cause no trouble to the community seems to be a huge demand when the Pandang-Dinka with their Fanjak-Nuer limit their thoughts out.  Apart from that, Riek Machar is not a guy who can be trusted anymore due to foreign policy which has now become the tools against the existence of Chollo Kingdom.

This could be a suggestion to follow what Rädhø mi Cøllø might have demanded in order to avoid future intercessions from other intruders or land invaders, and to prevent others  from engulfing southern Sudanese politic and Sudan’s politic as whole.  Ideology of some kind of mixed minor conflict with that of Riek Machar whose goal is to fight for a seat, when he (Riek Machar) knew that he has failed his duty as a deputy chairman or vice president.  The unsuccessful unity between Lam Akol, Pagan Amum and Adwok Nyaba is no longer up to Chollo people’s concern since a failed unity and peaceful dialogue is caused by the differ in their field politically.  The disputed land issues between Chollo and other communities could only be resolved by providing those life seekers some residential and farm lands.  When leaving, the land still belong to its ideal owners, the Chollo people in Chollo Kingdom.  The same Jieng-Pandang and Nuer-Fanjak should do in their land of their origins, the Jieng land or Naath land.  End Conflicts In Chollo Kingdom!

Minding Chollo Issues in Chollo Community and Other Dialogues.

We have 633 guests and no members online